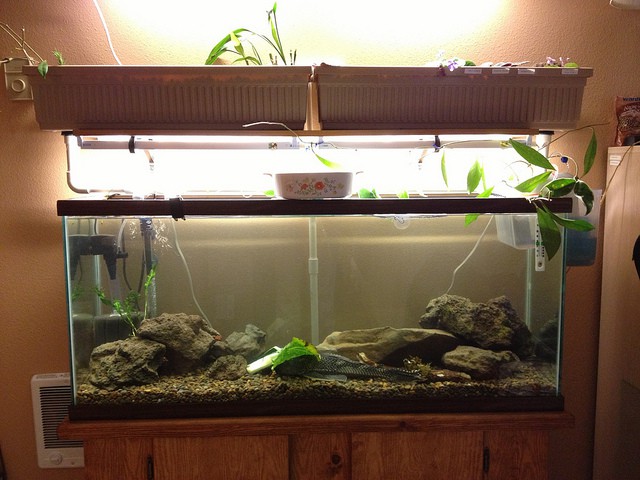 Aquaponics refers to a system in which conventional aquaculture (raising fish, prawns, snails) is combined with hydroponics (cultivating plants in water without soil) in a symbiotic environment. Aquaculture is the rearing of aquatic animals such as fish, prawns, crayfish among others while the hydroponic system is the cultivation of plants in water without soil. On one hand, the fish provide wastes that act as a source of organic nutrients for plants. On the other hand, the plants act as natural filters of the water. And apart from the fish and the plants, the third important factor is the microbes.

This nitrifying bacteria gather between the root spaces of the plants and convert the ammonia released by the fish waste into nitrites then to nitrates which are then absorbed as nitrogen by the plant. The nitrifying bacteria also convert the solid fish waste into a form called vermicompost that acts as food for the plants. The combined system is a form of sustainable crop production as well as water conservation. Combination of the aquaculture and the hydroponic systems ensure the aquaponics capitalizes on the benefit of both, and eliminate any drawbacks of the individual system.

1. Parts making up the Aquaponic system

a. The main units

The system is made up of two main parts. The first part is the hydroponic part where plants are grown. The second part is the aquaculture part where the aquatic animals are reared. Most aquaculture systems have a closed system recirculation which causes accumulation of aquatic effluents such as uneaten food and wastes from the fish.

Higher levels of these effluents in water are toxic to the aquatic animals but also contain nutrients that are essential for the plants. Apart from the two principal parts making up the system, it is also grouped into components or subsystems. These subsystems have the main role of removing the solid wastes, adding bases to maintain the optimum pH, and also maintaining the oxygen levels in the water.

Some of the components include the rearing tank, which is used to raise and feed the fish; biofilter, which acts as a place where the microbes important in fixing bacteria grow and the settling basin – a component whose main purpose is trapping the uneaten food and the detached biofilms. The settling basin is also where the fine solid particles are filtered out.

Most systems use gravel as supporting medium to increase the surface area for absorption of nutrient and ensure that solids are captured. The combination of the hydroponic component and the biofiltration sub-unit is more economical than using a separate filtering system.

The live component is made up of plants, aquatic animals and bacteria. Other systems make use of worms. For the system to work seamlessly, all three primary live components must be present.

The most common aquatic animal used is freshwater fish because they have tolerance for crowding. Other animals include prawns, and even in most recent aquaponics saltwater fish are also used. Cold water or warm water fish can do well in these systems. Most farmers tend to us the tilapia fish due to its ability to tolerate crowding, and changing water conditions.

Many plant species can be used for the system. The number of plants to grow will be determined by the fish population. The nutrients made by the microbes are absorbed in the roots of the plant. Common plants grown in aquaponic systems are Chinese cabbage, spinach, herbs, lettuce, and watercress.

Plants are grown in the system with their roots immersed in the water. The water is rich in effluent nutrients. Water passes through this subsystem, and moves on to be cleaned and oxygenated. The water is then released into the aquaculture vessels. Some examples of hydroponic systems or aquaponic applications are:

It is also known as raft based growing. This subsystem uses a foam raft floating over water with fish effluent and also has solid wastes removed. The plants in this system are placed in holes found on the raft with the roots dangling freely and immersed in water. Common plants grown using this method are salad greens.

The plants in this system are grown in inert planting media e.g. clay pellets and shale. This kind of media acts as a mechanical filter that removes waste as well as biological filtration. The system is best for people who would like to grow different varieties of crops such as fruiting plants. Examples of media based systems are AquaUrban 60 gallon system, AquaBundance system, and harmony.

Nutrient-rich water flows through pipes where plants are placed in holes with their roots dangling inside the water. Plants grown using this method include strawberries and herbs.

The system supports an incredible amount of food in a very small space. The plants are stacked on top of each other in a system such as the AquaVertica. The water flows from the top of the tower, and to an area where the plant absorbs nutrient. The water then flows into the fish tank directly below. Common plants grown using this method include strawberries and leafy green.

The bacteria that convert ammonia to nitrates are responsible for biological filtration. They form a biofilm around all solid particles within the system and are always in contact with the system’s water medium. The combined roots of the plants provide these microbes with a larges surface area where they can multiply and carry out their work effectively. The biofiltering units included in the system are important to maintain the population of the microorganisms.

The downside of the nitrification process of the bacteria, however, is that it makes the water acidic. As such, the pH has to be maintained at a safe level by adding potassium hydroxide. Minerals such as Iron should also be added to the water for absorption by plants. In order to reduce the solid build up, worms can be used to breakdown solid organic matter into soluble minerals that are absorbed by the plants through a process known as Vermipocins. Ammonia and Nitrite levels should be less than .75 ppm.

There are five main inputs into the system namely: water, light, feed, oxygen, and electricity that pump, oxygenate and filter the water. All this is necessary for “cycling” the system. To replace grown fish, spawn may be added to maintain a stable system.

It is equally imperative to use a feeding rate ratio, feed the input constantly, remove solids, control pests, control pH, ensure good aeration, and ensure adequate biofiltration and supplement using calcium, iron, and potassium for the system to run without hitches.

The standard measure of space should be about 0.5 kg of fish per 1 square foot with a bed of at least 30 centimeters deep or fish tank volume of 0.5 kg per 20-26 liters. And to keep the biomass of the system at maximum levels, three stocking methods including sequential rearing, stock splitting, and multiple rearing units can be used.

1. Grow both vegetables and fish. In an aquaponic system, one can grow vegetables and at the same time rear fishes. Moreover, the system is fully symbiotic where the fish provide the nutrients for the plants and in turn, they get their water purified.

2. The system does not require the use of fertilizers or any agricultural chemicals as the wastes from the fish have enough nutrients.

5. Utilization of a small space. One can grow an incredible amount of crops in a very small space

8. Disease-free environment. There are no cases of soil-borne diseases, pests, and infections because the soil is not used in the system.

9. No weed build-up. Due to its use of waist-high gardening, there is no buildup of weeds in the aquaponic system.

10. Minimal garden chores. The garden chores are minimal compared to conventional methods of farming, the only tasks are feeding the fishes and ensuring that the system is operating effectively.

12. Scalable farming system. The system is scalable and does not require a lot of capital to start and run. One can start it in the backyard.