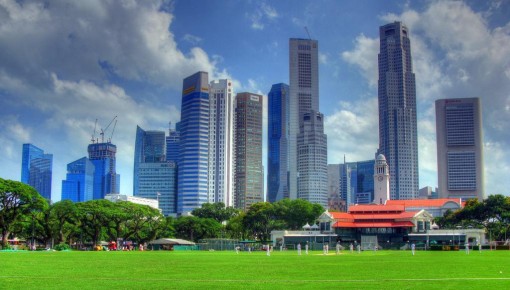 Apple has made another advancement in its quest to be more environmentally friendly in its operating procedures. On November 15, 2015 the electronics giant announced that a deal has been struck to provide all of its Singapore operations with power through the use of renewable energy – namely solar.

The company has systems built on top of more than 800 Singapore buildings. Because of the size and population density of the city, space for ground-mounted panels is scarce. Rooftops offer an alternative mounting location, and allow for plenty of room to expand.

This arrangement makes Apple the first Singapore company to draw 100% of its electricity from renewable energy. It also represents a major step toward Apple’s goal of using clean energy to power all of the operations and facilities worldwide.

The Apple project will involve solar panels that are capable of producing 50 MW of energy – of which Apple will get 33 MW. Not only will Apple benefit from the sun-generated power but other buildings in Singapore – such as public housing – will be able to take advantage of the electricity produced by the project as well.

Apple’s VP of Environment, Policy and Social Initiatives – Lisa Jackson – told Reuters that the project would enable Singaporeans to “get access to energy while we meet our own renewable energy goals.” Jackson also pointed out that the partnership with the tech firm would provide Sunseap with the financial backing it needs to complete the project.

Apple’s existing corporate office in Ang Mo Kio as well as the company’s first Singapore retail location will both be powered by the renewable energy source. Sunseap’s director Lawrence Wu said that the group expects to power not only those two buildings but any future Apple offices or stores that open in the city.

The partnership with Sunseap is just another step in a continuing mission for Apple to convert to more responsible, energy-efficient solutions in the course of its operations both overseas and in America. In October the company announced plans for solar energy projects totaling 200 MW (megawatts) of power in China, which would involve working with the company’s suppliers there on sourcing more clean energy.

“Climate change is one of the great challenges of our time, and the time for action is now,” said Tim Cook, Apple’s CEO. “The transition to a new green economy requires innovation, ambition and purpose. We believe passionately in leaving the world better than we found it and hope that many other suppliers, partners and other companies join us in this important effort.”

Apple’s press release shed some light on the scale of the company’s renewable energy plan in China:

“We’re doing this because it’s right to do,” Tim Cook said to an audience at a Goldman Sachs event. “But you may also be interested to know that it’s good financially to do it.”

In addition, Apple has also made a commitment to a California solar farm to buy power to supply its new Silicon Valley location as well as other facilities. Shortly before the Sunseap announcement, Apple was named as one of the companies making the most effort to fight climate change, along with Alphabet Inc. (Google parent company) and Microsoft.

“We need governments and companies to transition us to renewable energy as rapidly as possible,” said Gary Cook of Greenpeace, “Apple’s announcement today is a major step forward in building a renewably powered supply chain for its products.”

The Managing Director of Sunseap Group, Frank Phuan, hopes that the agreement with Apple will spur more companies to demand and use clean, renewable power.

Phuan said in a statement, “We expect a ripple effect for organizations in Singapore to incorporate sustainability practices in their businesses, especially for listed companies.”

Via Bloomberg and Reuters