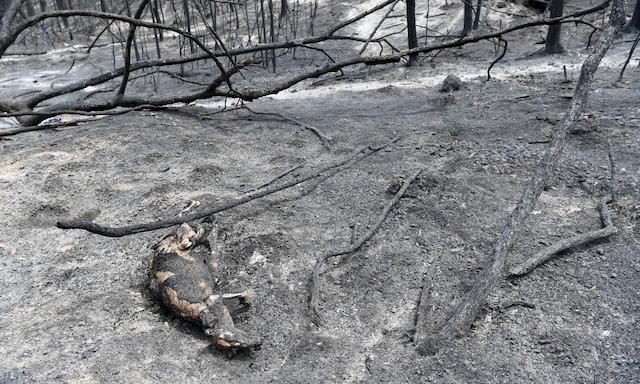 In Australia, over 1 billion animals feared dead nationally. Since devastating wildfires in Australia started spreading in September, nearly half a billion animals had been wiped out, an ecologist at the University of Sydney estimated last week. According to him, that number has soared to over 800 million in New South Wales and crossed 1 billion in whole Australia now.

“I think there’s nothing quite to compare with the devastation that’s going on over such a large area so quickly,” University of Sydney professor Chris Dickman told CBS News on Tuesday. “It’s a monstrous event in terms of geography and the number of individual animals affected.”

The figure includes birds, mammals (excluding bats), and reptiles, but frogs, insects or other invertebrates are not included.

“We know that Australian biodiversity has been going down over the last several decades, and it’s probably fairly well known that Australia’s got the world’s highest rate of extinction for mammals,” he continued. “It’s events like this that may well hasten the extinction process for a range of other species. So, it’s a very sad time.”

The fires that have burned nearly 20 million acres across the country could keep burning for months, authorities say. The death of at least 25 people reported, and in the entire towns, residents have been forced to flee their homes.

Dickman said as Australia often witnesses the effects of climate change well ahead of other parts of the world, these fires could be a preview of what could happen globally.

According to Dickman, the original estimate of 480 million animals killed included only the state of New South Wales, and the fires were very conservative. The number has escalated significantly as the flames have spread to other states.

The World Wildlife Fund Australia agreed to Dickman’s estimate. The wildlife conservation organization estimates that around 1.25 billion animals have been killed directly or indirectly because of the unprecedented fires, based on his research.

“This heart-breaking loss includes thousands of precious koalas on the mid-north coast of NSW, along with other iconic species such as kangaroos, wallabies, gliders, potoroos, cockatoos and honeyeaters,” the organization said on Tuesday.

The organization said that it might take decades for many of the country’s forests to recover, and many species “may have tipped over the brink of extinction.”

It’s not that every animal included in his estimate will be killed directly by the fires, Dickman stressed. Some animals will go underground and re-emerge in areas that do not have the proper resources to sustain them. Some will face new predators and may not be able to protect themselves.

Based on a WWF Australia 2007 report, the estimates came. Around 104 million native vertebrates died through the loss of food and shelter because of clearing about 1.6 million acres of forest, researchers found.

After the land of about 7.4 million acres had burned in the bushfires, Dickman came to his estimate. Last week, that number has more than doubled.

Koalas, which were already endangered species due to significant habitat loss, have been hit particularly hard. Since the fires began, ecologists estimated last week that nearly 8,000 koalas forming about one-third of the population are believed to have died in their primary habitat.

Bushfires are common in Australia. But climate change and extremely high temperatures exacerbating the intensity of the fires made this season’s “mega-fires” far from normal, WWF Australia said.

Organizations continue to emphasize that until the fires subside, the full extent of the damage will remain unknown.

“Due to the intensity, severity and size of the massive fires, few animals survive and the loss of wildlife and their habitat is heartbreaking,” WIRES, an Australian wildlife rescue organization, said in a statement Tuesday.

The wildlife hospital at the Australia Zoo announced that it is busier than ever in its efforts to save animals rescued from the blaze. It is run by the late Australian animal expert Steve Irwin’s widow Terri and family. Bindi, Irwin’s daughter, said, they are “saving as many lives as we can.”