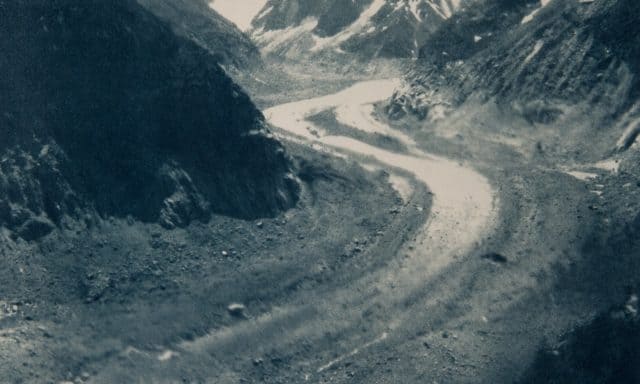 The toll of climate change is now evident in the images of the glaciated Alpine landscape created by Emma Stibbon. This contemporary artist is on the same path that was followed by the 19th-century artists JMW Turner (1775-1851) and John Ruskin (1819-1900) to catch the spectacular sites in the French Alps. The resulting images are a crisp reflection of the devastation of glaciated landscape due to climate change.

Emma Stibbon RA (Royal Academician) has been commissioned to go to Chamonix with the objective of creating a contemporary response to the worries raised by John Ruskin and capture the glaciers around Mont Blanc in her drawings and photographs for the coming exhibition on Ruskin and Turner.

It is the same location where in the early 1800s, Turner painted glorious watercolors and now decades later that inspired Ruskin to start his Alpine tours, photographing and drawing “Mer de Glace” the breathtaking glaciers. Emma reflected the effects of climate change on Alpine landscapes through her powerful and large-scale pencil drawings that were once treasured by Ruskin and Turner.

More than 160 years ago, it was the month of June in which Ruskin created his daguerreotypes (a photograph made by an early photographic process) of the Mer de Glace, and in the same month, Emma applied cyanotype, another primitive photographic process to find his viewpoint for her creations.

While Turner and Ruskin’s observation of the drama of a sea of ice was almost at the level they stood, Stibbon looked down into a bare deep valley with “a dark moraine-covered floor, almost completely devoid of ice.” According to her “It’s unrecognizable.”

Emma Stibbon’s commissioned drawing was for the exhibition ‘Ruskin, Turner & the Storm Cloud: Watercolours and Drawings’ opening at the York Art Gallery in the month of March and Abbot Hall, Kendal, in the month of July as a part of a worldwide programme of exhibitions, publications, and conferences to celebrate the occasion of 200th birthday of John Ruskin.

Ruskin was an artist, writer, and social reformer but his achievements sometimes eclipsed due to his unconsummated marriage to Effie Gray, defamation brought by painter James McNeill Whistler and other scandals.

The exhibition will include Turner’s a dozen works and more than 40 of Ruskin including the art by their contemporaries such as John Inchbold, Constable, and Hubert Herkomer. The new research will disclose how Ruskin responded to Turner’s vision, and his own experience of observing the mountains, weather patterns, and the built environment closely.

Stibbon said “When we think of the Alps, we think of iconic white peaks. By the end of this century, there probably won’t be any snow.” According to her, Ruskin felt ahead of time that “the Industrial Revolution was affecting air quality and that air pollution got linked to the use of coal. He could see that glaciers move and I think he suspected that there was some [ice] recession, which would have started around that period in the 1850s.”

An author of a new book, To See Clearly: Why Ruskin Matters and the research curator at York Art Gallery, Suzanne Fagence Cooper said Stibbon’s images disclose the glacier retreat “very clearly,” and capture a “sense of real loss.”

The celebration of bicentenary of John Ruskin will continue with a cinema screening in the UK, from 22 February of Effie Gray – the 2014 film written by Emma Thompson and from 26 January the exhibition, John Ruskin: The Power of Seeing at Two Temple Place, London featuring 190 and more exhibits that clearly reveal Ruskin’s influence is still very much there to feel. The Ruskin events also extend to America and Japan.

According to Robert Hewison, the author of the recently published Ruskin and His Contemporaries, “Ruskin was, by the end of his life, treated as a kind of prophet – although not in his own country – for predicting both economic and ecological deterioration. Climate change appears to show that he was right.”