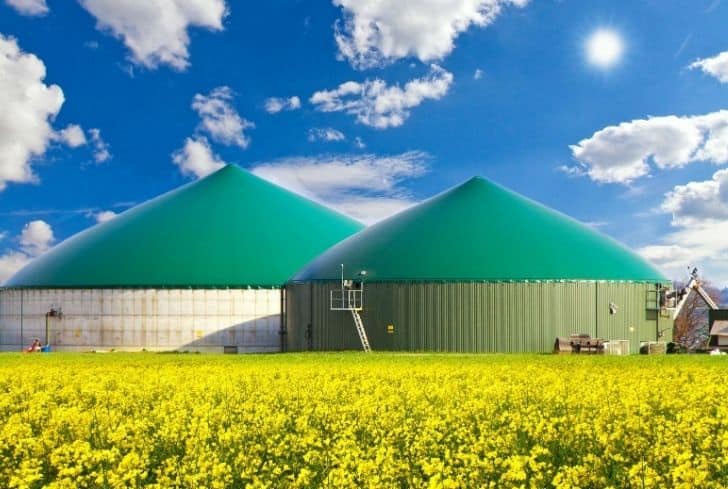 The idea of producing flammable gas from decomposing plant matter was brought up by the ancient Persians. The idea culminated in the building of the first sewage plant in 1859 in Bombay, India. The concept was then brought to the U.K. in 1895 when the generated biogas was utilized to light up street lamps. Further advancements in the biogas systems were witnessed in Germany and the U.K. at the onset of the 1900s for sewerage treatment purposes.

Centralized drainage systems spread across Europe, and anaerobic digestion was viewed as a means to minimize the amount of solid waste in the sewage. The resultant gas was sporadically utilized as an energy source to power vehicles.

“Biogas, naturally occurring gas that is generated by the breakdown of organic matter by anaerobic bacteria and is used in energy production. Biogas differs from natural gas in that it is a renewable energy source produced biologically through anaerobic digestion rather than a fossil fuel produced by geological processes.”

In the 1930s, farm manure was used to produce methane gas in Bombay. An improved design that used a floating steel gas drum was developed at the start of the 1960s, which became the cornerstone of the government of India’s outreach program to offer villagers a convenient means to cook their foods.

In the same year, China rolled out the same initiative, and by 1980, there were more than 5 million biogas plants. The 1980s saw the replacement of the rectangular biogas plant design by the dome-shaped design. The biogas program was exported to Nepal, which is today known as the Biogas Sector Partnership (BSP).

The skyrocketing prices of oil in the 1980s led many people to embrace biogas. However, the prices of oil dropped later, which translated to a significant drop in electricity bills. This phenomenon reduced biogas enthusiasm, but few biogas plants managed to survive. The biogas programs in India, China, and Nepal have scaled up steadily over the years. Today, interest in biogas around the world has gathered momentum, and more people are setting up biogas plants to produce biogas.

India invests more than INR 6 billion each year in the biomass generation sector, producing more than 5000 million units of electricity in the process. The industry also creates annual employment of 10 million man-days in remote villages.

Anaerobic digestion takes place in a large tank commonly known as a digester. Inside this digester, bacteria convert these organic wastes into methane gas, a reliable source of energy.

Biogas is majorly a mix of methane and carbon dioxide. It may also contain traces of siloxanes, hydrogen sulfide, and moisture. The resultant energy in the anaerobic digestion (biogas) can be used directly for cooking by burning it in the presence of oxygen. It can also be converted into electricity by using it to convert water into steam, which turns a turbine connected to a generator.

See also  Green Roof: How Does it Work, Types, Benefits and Examples

Just like natural gas, biogas can be easily compressed and used to power automobiles. Better still, biogas can be purified and upgraded to the natural gas standards when it’s converted to biofuel known as biomethane. The process of anaerobic digestion leaves behind a nutrient-rich matter called digestate, which is commonly utilized as fertilizer.

Most organic matter begins the process of decomposition when it is exposed to oxygen and sunlight. However, organic matter can also decompose without any oxygen, by the process of anaerobic fermentation. This happens due to the bacteria present in the matter, which acts during the absence of oxygen.

Landfills see a lot of such decay, especially when the waste material becomes wet and receives little sunlight. As a result, a lot of methane and nitrous oxide are produced and released into the atmosphere. Biogas is the result of this decay, and it is an energy source like no other.

The raw materials used in the production of biogas are renewable. Trees and crops will continually grow, which means manure, food scraps, and crop residue will continuously be available.

However, carbon dioxide is produced in the biological breakdown process (anaerobic digestion), as well as in the course of using the biogas. The difference is the carbon dioxide produced is far less compared to that produced by fossil fuels.

The fact that it is produced from renewable sources makes it reliable. Other renewable energy sources like solar and wind depend on the weather patterns or day time factors to continually produce electricity. Biogas production continues regardless of the weather. The biogas production process goes on uninterrupted (24/7).

4. Reduces the Amount of waste Going to Landfills

We all know that overflowing landfills cause environmental impacts such as foul smells and toxic liquids draining into underground water sources. Instead of disposing of these organic materials to landfills, they can be used to produce biogas.

The technology used to produce biogas is pretty cheap. Biogas plants can be developed right at home using locally sourced materials. The resultant gas can be used directly for cooking and generation of electricity. Biogas can also be compressed to achieve the quality of natural gas and utilized to power automobiles.

The raw materials used for the production of biogas such as manure, crop residue, food scraps and wastewater sludge are absolutely free. This makes the cost of biogas production significantly low.

Biogas plants have created millions of jobs in most countries, especially in the area of waste collection and biogas generation. For example, in India, the biogas industry creates more than 10 million man-days jobs each year in rural areas.

In recent times, water pollution has become a major source of threat to our sustenance. With every passing day, the amount of freshwater available for our usage is decreasing. At such a juncture, it is extremely crucial that we try everything that is in our power to reduce water pollution. Using biogas helps in doing exactly that.

Landfills do not only pollute the environment, but the decomposition of certain landfill wastes releases certain toxic materials into the ground. These materials then percolate to the underground water table and poison or pollute the water.

This water, when used or consumed without purification, can cause severe health hazards. But since using biogas also controls the amount of waste that goes into landfills, it also helps in controlling water pollution to a certain extent.

Many countries like India and China have invested a lot of money in the biogas sector. This has helped these countries cut back on fossil fuel use. This act has particularly helped China, the world’s top consumer of energy, to cut back on the use of fossil fuel sources of energy like oil, gas, and coal.

Waste collection and management significantly improves in areas with biogas plants. More people get involved in waste collection in order to get a source of income. This leads to overall sanitation and hygiene of the areas.

The process of biogas generation leaves behind enriched organic manure (digestate), which is a perfect supplement or replacement of chemical fertilizers.

Chemical fertilizers can be harmful to the soil as well as for the environment as a whole. Thus, natural fertilizers are the best and the safest option available for us. The generation of biogas helps in this aspect too. It also produces organic fertilizers. In fact, it is a by-product of biogas production.

The fertilizers so produced are really helpful in accelerating the growth of the plants. Not just that, the use of these natural fertilizers also helps in preventing the diseases that would have otherwise been caused due to the toxic materials used in the chemical fertilizers.

Collecting and carrying firewood on a daily basis is a daunting task. Also, exposure to smoke from the firewood can cause health complications. Biogas provides a great reprieve from these activities. Also, biogas minimizes the time needed for cooking and cleaning utensils.

Believe it or not, there is still a section in the society that depends on firewood and the likes of it to produce fire for cooking. This exposes them to several health hazards that could be really fatal for them.

Despite knowing these, they simply cannot afford LPG cylinders to help them with the process. For such people, biogas is both- a safe as well as a cheaper alternative. It really helps in making cooking a better experience for them.

12. It Encourages Developing a Circular Economy

If the production is small scale and meant for personal use, then the cost of production is really under control. Thus, what is produced is a self-sustaining kitchen system that supplies for itself. The economy of the household is well managed too.

What is interesting is that the materials that are required for the production of biogas for the home kitchen come from the home kitchen itself. Thus, the chain of products is circular and is always maintained. This is especially helpful in rural areas.

The systems used in the production of biogas today are not efficient. There are no new technologies yet to simplify the process and make it abundant and low cost.

This means large scale production to satisfy a large population is still not possible. Although the biogas plants available today can meet some energy needs, most individuals and governments are not willing to invest in the sector heavily. This aspect has led many people to put up biomass systems in their homes, which are short on capacity.

Biogas still contains impurities even after refining and compression. When utilized as fuel to power automobiles, it can corrode your engines and lead to extraordinary maintenance costs.

3. It Can’t Work in all Locations

Biogas production is only feasible in certain locations where raw materials are in plentiful supply. Rural areas provide the best locations for building biogas plants. However, it’s impractical to built biogas plants in large cities.

Compared to other biofuels, the production of biogas is not attractive economically, especially on a large scale. It’s difficult to beef up the efficiency of biogas plants, which explains why people and most governments are coy about investing in this realm.

5. Biogas Production is a Temperature-sensitive Procedure

Biogas production, like the production of energy from other renewable and sustainable resources, is temperature sensitive and is affected by the weather.

The bacteria that are responsible for the production of biogas from the decomposition of organic materials need a specific optimal temperature. The aiding bacteria require an optimal temperature of 37oC to function properly. If temperatures drop below that, external heat has to be supplied to the digesters.

Biogas as a source of energy