Photovoltaic solar panels are a means of converting sunlight directly in to electricity via the usage of solar cells etc. Abbreviated as PV for short, this photovoltaic technique is one amongst the two major methods that can be used to utilize the solar energy in the most efficient manner. The other methodology is the solar thermal one.

The latter utilizes concentrating solar power plants where in the electricity is manufactured via the sun’s heat and radiation. This heat that has been created using these solar thermal collectors is then deployed for usage in warming up fluids. These warmed up fluids, in turn, produce steam that is then used for running turbines in order to generate electricity. Below is mentioned a brief outlook as to how photovoltaic solar panels operate.

1. The sunlight is first made to strike on top of the surface of numerous solar cells.

2. This sunlight then knocks down loosened electrons thereby leading to the creation of an electron imbalance therein.

3. These electrons then flow outside from the back of the solar cells towards the front.

This flow of electrons constitutes what is known as ‘electricity’. One can even connect more than one solar cell in to an item named ‘module’. Multiple modules when deployed together for a particular operation constitute an ‘array’.

Talking about the usage, photovoltaic solar panels are perfect for usage in both southern as well as northern climatic conditions and take in to consideration only the intensity and amount of sunlight. 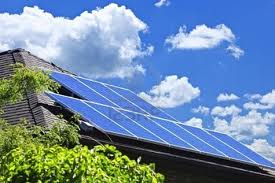 Contrary to this, its other counterparts consider the amount of heat only. The intensity of light significantly increases as one proceeds towards the equatorial region leading to a more enhanced usage of photovoltaic solar panels in the northern latitudinal regions. Even in England, wherein the weather is almost always cloudy and rainy, large PV systems have still been established in order to manufacture and use electricity for numerous commercial or residential purposes.

Photovoltaic systems are an efficient means of providing residential solar power needs to the fullest. Being modular, these systems can very well be started from the very beginning via a smaller as well as a basic system. Further add-ons can then be added to it as and when required. For instance, one could simply start on with, say, one or two photovoltaic solar panels and then get on to the main control setup. After a few months, more panels can be added if the time and money constraints aren’t hindered. In order to power your whole house, you need to install numerous photovoltaic solar panels for designing a complete system. Moreover, you can even design the best of photovoltaic cells with yourself only.

Another renewable natural energy resource from which one can efficiently derive some usage is the wind power which although is a bit unpredictable. Being less predictable than the sunlight, wind energy fails to generate 100% in some areas. But, apart from all these consequences, wind is a great supplement to sunlight though. When the power of sun and wind is combined together, it proves to be the best and clean renewable energy resource combination that has existed till date.