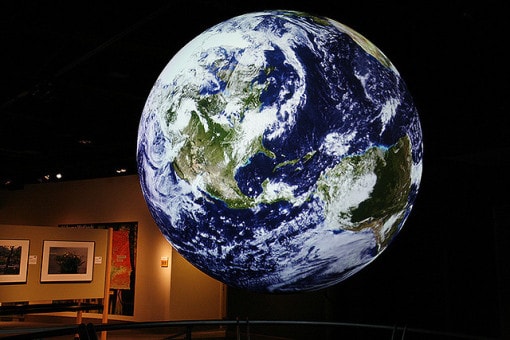 We throw away many millions of tons of rubbish every year, for instance, that could be recycled. By using less energy, less water and being more careful about the way that we dispose of certain things like batteries and motor oil, we could start to save the planet. Here are just a few of the most fascination facts and figures about the Earth, how we are slowly destroying it and how we can start to make a difference by doing our bit for the environment.

To see the earth as it truly is, small and blue and beautiful in that eternal silence where it floats, is to see ourselves a riders on the earth together, brothers on that bright loveliness in the eternal cold-brothers who know now they are truly brothers.
~Archibald MacLeish, American Poet

Here are 51 amazing facts about our planet ‘Mother Earth’.

Fact 1. 90% of all rubbish in the world’s oceans is plastic which can end up killing or disfiguring animals and plants.

Fact 2. An average of 100 acres’ worth of rainforests are being cut down every single minute.

Fact 4. Less than 4% of America’s forests are left after being cut down for building materials and fuel.

Fact 5. 80% of all the forests in the world that were there after the departure of the last ice age are now gone, mainly because of the logging industry and our need for more arable land.

Fact 6. In the fall, leaves actually constitute 75% of all our solid waste.

Fact 7. 40% of our waterways are dangerous to drink from because of the toxins and chemicals that have been spilled in them.

Fact 8. Between 50 and 100 species of plants and animals go extinct every single day because their habitats are destroyed by humans, often for farming.

Fact 9. Some species of fish have been reduced to just one tenth of their original population because fishing has gotten out of control.

Fact 10. Over 200 of the world landfills were completely full in 1995. We are really starting to run out of space to dump all our rubbish, most of which can simply be recycled!

Fact 11. Around 5 million tons of the oil produced throughout the year ends up in the ocean each year.

Fact 13. Every year we dump 14 billion pounds of trash into the ocean rather than either recycling it or disposing of it properly in designated landfills.

Fact 14. There is a ‘garbage patch’ in the Pacific Ocean that is just a twisting and turning vortex of trash and waste. Its size is twice that of continental American and it thought to contain nearly 100 million tons of garbage.

Fact 15. Every year we lose 50 million acres of rainforest – that’s an area the size of English, Wales and Scotland all together. This means the deaths of many different animals and plants and even the extinction of hundreds if not thousands of species, some of which we have not yet even discovered.

Fact 16. If we continue to release greenhouse gases into the atmosphere at the same rate as we currently are, scientists estimate that our average temperatures will rise by 12 degrees Fahrenheit by the end of the 21st
century.

Fact 18. 75% of every vehicle is actually recyclable.

Fact 20. Plastic bags and other plastic products that are thrown into the ocean will kill on average 1 million sea creatures each year.

Fact 21. Only 1% of all the water on our Earth can be drunk. The rest is ocean water and is frozen in the Arctic.

Fact 22. We gain 77 million people each year, which means that resources are getting very stretched.

Fact 23. On average, 50,000 species living in our tropical rainforests become extinct every year, even those that we have not discovered yet.

Fact 24. Aluminum can be recycled endlessly, so there is no excuse to throw your cans away!

Fact 26. Just one supermarket can throw away over 60 million paper bags each year. Many of these will end up in the world’s oceans.

Fact 27. Modern glass bottles can take more than 4000 years to decompose, but they can easily be recycled.

Fact 28. If we do recycle just one glass bottle, we save enough energy to light a normal light bulb for around four hours.

Fact 29. It is estimated that 84% of all household waste could be recycled rather than thrown in landfills and left to take hundreds if not thousands of years to decompose.

Fact 30. Most families, it is though, throw away around 88 pounds of plastic annually.

Fact 31. One in four mammals are facing extinction.

Fact 32. 78% of our marine mammals are threatened with extinction because of accidental deaths caused by getting caught in nets meant for catching fish, for instance.

Fact 33. If we were to start recycling all newspapers, we could save an average of 250 million trees every year.

Fact 35. Americans use one million gallons of oil every couple of minutes.

Fact 36. 200,000 people are moving away from cities every day because they can no longer support them.

Fact 37. Every day, there are approximately 27 oil spills somewhere in the world.

Fact 38. Americans throw away, rather than recycle, an entire commercial fleet of airplanes’ worth of aluminum every three months.

Fact 39. 40% of all the water sold in the world as bottled water is actually tap water.

Fact 40. Paper can actually only be recycled six times.

Fact 41. It costs 90% more energy to make new aluminum cans than to just recycle them.

Fact 42. We use approximately 5 billion aluminum cans each and every year.

Fact 43. We throw away each wood and paper every year would be enough to heat 50 million homes for 20 years.

Fact 44. It is estimated that only 10% of every landfill can be cleaned up.

Fact 45. The billions of used batteries that are thrown away in America alone constitute to 88% of the mercury and 54% of the cadmium in the landfills today.

Fact 46. Disposing of just one gallon of motor oil improperly can end up contaminating up to 2 million gallons of water.

Fact 47. Recycling just one aluminum can save enough energy to run a television for three hours.

Fact 48. Using an automatic dishwasher rather than doing the dishes by hand can use an average of six gallons less hot water per cycle, adding up to over 2,000 gallons of hot water a year.

Fact 49. Americans alone use 2.5 million plastic bottles every hour and the vast majority of these are thrown away.

Fact 50. The population of people on Earth has grown more in the last 50 years than in the last 4 million.